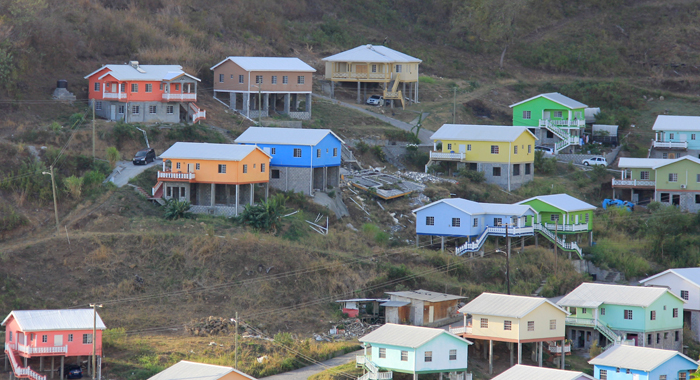 The woman withdrew her application after a house collapsed in Clare Valley, where another has been identified for demolition. (IWN photo)

A single mother who has been waiting since October 2014 for a refund of EC$26,000 she deposit on a government low-income house says she wants her money back immediately as she is finding it difficult to meet their financial and familial obligations.

“I think that because it is not in the public domain they think it is okay; but it is not,” she told I-Witness News of the long wait for her money from the Housing and Land Development Corporation (HLDC), the state-owned agency that is building the houses and to which the deposit was made.

I-Witness News understands that the woman, who asked that her name not be used in this story, is among five persons who have withdrawn their application for houses under the programme, an initiative of the Unity Labour Party Government.

She withdrew her application on Oct. 23, 2014, one month after one of the houses in Clare Valley collapsed and it because public that many of the other houses were shaking or had other problems.

Before the collapse of the house, the woman had been waiting since April 2013 for the HLDC to begin work on her three-bedroom house at Clare Valley on which she had made the deposit.

But in a letter on Oct. 21, 2014, then Manager of the HLDC Elvis Charles had apologised to the woman for the delay.

Charles, who has since been removed as manager of the HLDC, also informed the woman that “Due to the recent events which has occurred at the site, with the collapse of the house, we regret to inform you that we would have to focus our attention at this time on remedial works at the Clare Valley site.

“Also, we recognise that in relation to the houses awaiting construction, all necessary infrastructure, including drainage, must be established prior to commencement of work,” Charles wrote, adding that the woman would be informed when work on her house would begin.

But the woman, in a letter on Oct. 23, 2014, informed the HLDC that she is withdrawing her application for the house.

“This decision comes after the long wait and lack of communication from the HLDC in delivering on its promise to provide a house by December 2014,” she wrote.

“I also found it necessary to withdraw my application after the recent developments in regards to houses that were already constructed by your said corporation.

“I am therefore requesting that all monies paid to your corporation for lands be refunded so as to seek alternative housing,” she wrote.

Charles responded to the woman by letter on Nov. 5, 2014 acknowledging her decision. “Please be advised that selections are being done for a new recipient for your lot. When this is concluded the information would be forwarded to your financial institution in order that they may prepare the necessary paperwork to have the matter expedited,” Charles wrote.

But after waiting for almost three months more, the woman wrote to Prime Minister Ralph Gonsalves on Jan. 31, 2015 outlining to him the responses she had received from the HLDC and the challenges she is facing as a result of the financial limbo.

She told the Prime Minister that she made several calls to then chair of the HDLC, Beresford Phillips. “The responses were never favourable, usually being that ‘we’re putting things in place and we’re going to start soon,’” she said in the letter.

The woman told Gonsalves that after the collapse of the house, she called Phillips twice: to get an understanding of what was happening, and to advise of her decision to withdraw her application.

“The second conversation did not go well. Mr. Phillips was very hostile towards me and told me that I could do whatever I wanted, that I was free to withdraw and he was not going to tell me what to do.

“I asked about the monies I had already paid to the HLDC and I was told I would be refunded,” the woman said in her letter to the Prime Minister of her conversation with Phillips, who is now the Unity Labour Party’s candidate for Central Kingstown in the next general elections.

The woman said in her letter to Gonsalves that she wrote to her financial institution advising of her withdrawal and applied for an alternative loan to purchase a property she had located in another South Leeward community.

“This property was within the same price range as the low income house. I was however disheartened as this loan was not approved due the outstanding loan tied to the HLDC property for which I had withdrawn my application but was still on their books because they (financial institution) have not being advised otherwise by the HDLC,” she said.

“December 2014 came and I had to leave my relative’s home as agreed prior to my moving there. They had other occupants and simply could not house us all. Unable to find an apartment I was forced to move to [North Leeward]: mother’s home.

“For three weeks, I incurred the additional cost and inconvenience of the long commutes which were difficult (up by 5:30am returning from work by 8pm due to the limited of space in vans),” the woman wrote in her letter to Gonsalves.

She said that in 2015 she moved into an apartment in the suburbs of Kingstown.

“The apartment is comfortable, however, the rent is one-quarter of my salary before taxes. There is no public transport in the area so every morning my son and I walk for 30 minutes to get to Kingstown. There are times when we are able to arrange a ride and other times we hope that someone is kind enough to offer us a lift.

“I assure you, Sir, that I am not one to fuss or make unnecessary complaints but at this point I am beyond frustrated as I struggle to pay my rent, put food on my table and honourably maintain a mortgage for something I do not have and for which I have received an acknowledgement and acceptance of my withdrawal.

“The worst of it Honourable PM is that no near resolution from the HLDC seems forthcoming.

“I will be very grateful if you would extend me a bit of your time and look into my matter. Your input and assistance in expediting the refund process would make the necessary difference. In so doing allow this [financial institution] — HLDC loan to be cleared; freeing up much needed income to make life for my son and I a little more comfortable,” the woman wrote to Gonsalves.

She told I-Witness News on Thursday that she is yet to receive a response from Gonsalves to the letter that she said was hand delivered to the Office of the Prime Minister in Kingstown.

Meanwhile, manager of the HLDC, Kenyatta Alleyne, who took up that position in February, told I-Witness News on Thursday that withdrawals of application for the houses are “unusual”.

“Because it is unusual, it has to go through the processes that are consistent with the banking policies — how the bank closes out on a mortgage and things like that, and HLDC as well, because there are covenants when you purchase land…”

“But we actually are in discussions with the bank, even as we speak, back and forth on bits of information that will bring clarity to that and closure to the issue,” he said, though not speaking of the woman’s case specifically.

“It’s been a while in several cases but I can’t say next week, because this is the closest we are to closing out on these issues.

“But, again, as I say, there is no set procedure for it. The bank is being fairly cautious as well, because they don’t deal with a scenario of this nature with a corporation. They might deal with it with an individual, but several other things may apply where there is a covenant, other things like that.”

He told I-Witness News that he doesn’t think that in the past the HLDC had people “withdrawing in this way”, adding that five persons have withdrawn for various reasons.

“It is not meant to sugar coat or hide or anything like that, but, like I say, it is a specific situation that need specific procedures. It’s not written down at HLDC, per se, nor is it just straightforward for the bank to close out on a transaction like that.

“As I said, it is in discussion with the bank, so there’s not much information I can divulge and say this is where we are going, because, again, the bank still has information which it has to peruse,” the HLDC manager told I-Witness News.