Women urged to take stand against ‘rape culture’ in SVG 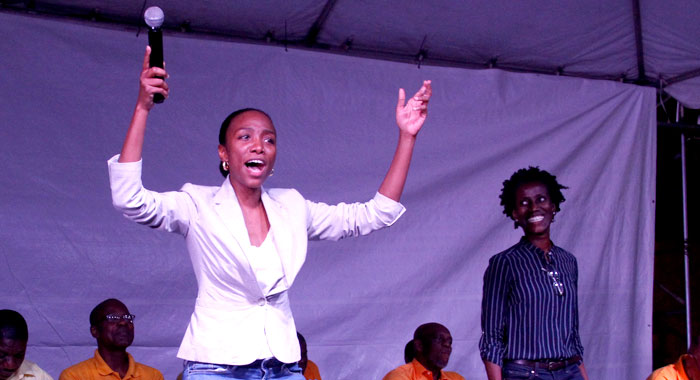 The Women’s Arm of the main opposition New Democratic Party says that St. Vincent and the Grenadines “can very fairly be described as having a rape culture”.

Sen. Marcia “Zita” Barnwell and Maia Eustace, both lawyers and members of the NDP’s Women’s Arm used their joint speech at their party’s rally in Kingstown last Wednesday to encourage the nation to “Raise your fist! Raise your voice!” against the abuse of women.

Barnwell told a rally that a few nights before, on their radio programme, a caller had said he thought that having a rape culture meant that when women walk the streets they would be raped.

Eustace, who is daughter of former opposition leader Arnhim Eustace, said that rape culture describes a society in which rape and other sexual offences against women occur, as well as domestic violence, and any form of oppression, domination of women, is just normalised and treated as if it is everyday and OK.

“Why do we describe St. Vincent as having a rape culture? We are not doing it to be alarmist.  We are doing it because St. Vincent and the Grenadines, among other things, has the distinction of being the only country I have ever heard of to host a rape rally.”

Opposition supporters have branded as a rape rally, the event that the Unity Labour Party had in Kingstown some years ago in support of their leader, Prime Minister Ralph Gonsalves, when a woman on his security detail accused him of raping her.

Eustace said that the United Nations has been watching SVG very closely.

“We disclosed data to you in 2015 that indicated that over a 10-year period ending in 2011, St. Vincent and the Grenadines was topping the charts of over 110 countries in relation to rape and sexual offences against women and children.”

Barnwell said she was doing research recently to show why the opposition has no confidence in the ULP administration.

The senator said that rape against girls under 15 and 13 is far greater than rape of adult women.

Eustace said that having sex with a girl under the age of 15 – the age of consent — is rape.

“There is no other name for it. A child cannot give consent,” Eustace said.

In SVG, if a girl under 15 consents to sex, it is considered “statutory rape”, since she has not reached the age of consent.

Eustace said that SVG has, for a long time, been on the radar of a lot of countries and international organisations in terms of the status of women.

“So imagine how much worse it gets when a senior minister, one who holds arguably the most important portfolio, finance, refuses to respond to an allegation of sexual exploitation.”

She was referring to the continued failure of Minister of Finance Camillo Gonsalves to respond to the allegation by former model Yugge Farrell that they were involved in an extramarital relationship.

Farrell spent three weeks in January in a psychiatric hospital after being brought before the court charged with using abusive language to the minister’s wife, Karen Duncan-Gonsalves.

“What that says implicitly is that it’s not a big deal. That is the normalising effect we spoke about,” Eustace said of Mr. Gonsalves’ continued silence on the allegation.

“He does not recognise or he refuses to acknowledge that this is a country where, more so than St. Lucia, where there was a 24-hour response when there was an allegation against a minister, [more so] than the Unites States, where man by man by man falling down as a result of allegations, and in the United Kingdom, the same is happening.

Barnwell said that this is so because “silence is used as an instrument of oppression”.

She spoke about the in-studio conversation inadvertently broadcast on the ULP’s radio  in which persons were making light of the Farrell- Gonsalves scandal.

Barnwell said that the ULP uses its radio station as an instrument for silencing women who do not sit well in their circle.

They use it “to trample on, denigrate, demean our women.
“They also use their press conferences to do the same thing. Women such as Kate, Luzette King, Vynnette Frederick, Miranda Wood, Jozette Bibby, Margaret Parsons, Michelle Andrews, all women.”

Eustace said that the women’s arm of the NDP wants people to know that while the ULP is accusing the NDP of politicising the issue, “Any political party that turns a blind eye to what is happening to women in St. Vincent and the Grenadines is irresponsible and is complicit. So we have a duty to speak just as Camillo Gonsalves has a duty to respond.”

Eustace said that in court last Monday, when Farrell and Mrs. Gonsalves appeared for a hearing in the charges against Farrell, she saw two women, one in the witness box and the other in the dock.

“The accused, the virtual complainant. Yugge Farrell, Karen Gonsalves. It would be so easy to simplify this by describing one as the oppressor and the other as the victim. Yugge Farrell is nobody’s victim… And Karen Gonsalves is a woman too. They are both operating in a system that normalises our oppression. They are both victimised by that system in the way that every single woman here and within earshot of this microphone is victimised by it,” she told the rally at Heritage Square, Kingstown.

Barnwell said that women need to stand firm and say they cannot be silent.

“Let your voice be heard. Be encouraged,” Barnwell said.

“Men who are incensed by this, raise your fist too, because we have to do it together,” Eustace said.

The women led the crowd in a chant of