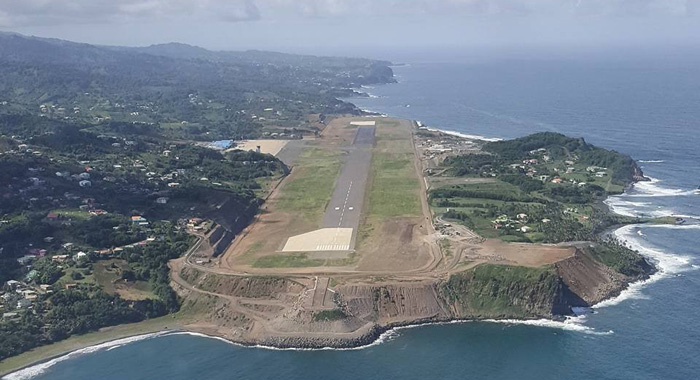 Is AIA destined to be always this deserted? (Photo: Kyle Hannaway/Facebook)

The Aug. 19, 2016 The Vincentian newspaper’s lead editorial on the never-ending construction of Argyle International Airport (AIA) left me dumbfounded. How could the writer(s) be so naïve and ill-informed as to produce such an insipid piece of writing? Clearly, the lead editor must have been drinking from the same pitcher of Kool-Aid as the International Monetary Fund, which also baselessly championed the airport’s prospects for our development in their last country review

The editorial focuses on what is claimed to be a slight “erosion in the level of public enthusiasm” for AIA owing to the constant delays in its completion. The only other substantive concerns raised are: (1) who is going to operate the new airport; (2) “whether the government is truly levelling with citizens, and whether we are getting a true picture of the actual state of affairs [of the airport project]”; and (3) “the apparent failure on the part of the private sector to make appropriate investments [in the hospitality, agricultural, agro-processing and fishing sectors] so that … the country can benefit from the operations of the Argyle airport.”

Beyond question is whether we even need an international airport, the assumption being that the answer is a self-evident “yes, we do!” Those who might question this truism are accused of “negative propaganda on the part of unpatriotic and misguided persons who could not distinguish between national interests and narrow political or partisan ones.” That at least some critics might be neither unpatriotic, misguided, political, nor partisan is simply inconceivable, according to the official editorial position of the newspaper.

This closed-minded approach has been heard many times before in attempts to shut down discussions of the feasibility of the airport. In the field of logical argumentation — a form of inquiry that seems beyond the reasoning power of the newspaper — this is called a non sequitur (Latin for “it does not follow”), a logical fallacy in which a conclusion does not necessarily spring from its premise. In this case, there is no inevitable empirical or analytical connection between questioning the viability of AIA and being loyal to your country or supporting some political party or the other.

Conversely, the editorial is wilfully ignorant of the possibility that the construction of the airport may have more to do with the maintenance of political power — the continued rule of the ULP from one election cycle to the other — than it does with “help[ing] us to lift off on the road to modernisation and prosperity,” as if airport’s completion would necessarily have this effect (yet another non sequitur).

Indeed, support for my contrary assertion that AIA has been a constant election ploy may be found in the superficial contradiction between the fact that AIA, “still remains dear to the hearts and minds of most Vincentians” and the unwillingness of our private sector to build more hotel capacity. Apart from having empty rooms much of the year — a disincentive to expand their number if there ever was one — our small local hotel sector simply lacks the millions in capital or borrowing power to make even a minor contribution to the success of the airport, the main reason the government has tried so hard for years to attract deep-pocketed foreign hospitality developers. But what The Vincentian fails to grasp most of all is that as far as party-politics in SVG is concerned the “patriotic” masses have far more votes than the profit-oriented hotel owners.

As for the question, “Where are the investments in agriculture, agro-processing and fishing, all areas which can get a lift-off from the Argyle facility?” — another non sequitur — I have already argued that all over the world most products from these industries are transported by ship rather than plane . Can The Vincentian actually be blind to all the container ships arriving in Kingstown on a regular basis loaded with fresh, chilled, frozen, canned, packaged, and bottled food from around the world?

There is also the factual error about AIA addressing the need for more airlift “during the June/July period, the high point for Carnival and vacation travel” as shown, the newspaper claims, by the stranding of travellers because of insufficient LIAT flights and capacity during the recent Carnival. Is it remotely possible that this newspaper is ignorant of the fact that nearly all international carriers either reduce or eliminate flights to the Caribbean during the low-season, May-October, in order to service the busy North American and European summer markets?

Still, the newspaper was quite right to question “whether … the government is truly levelling with citizens, and whether we are getting a true picture of the actual state of affairs” but was prevented from pursuing the implications of this query — for example, that the airport cannot be declared open for business because there is no business to open for — given its entrenched biases, ignorance of the facts, and fuzzy logic.

The editorial ends with one final laughable non sequitur: “We must swim together on it [making the Argyle airport project a success].”

First, Vincentians never “swim together” on anything (Who does not recall the analogy that rightly compares we Vincies to crabs pulling each other down as we try to get out of a barrel?). Second, the irony of using a swimming analogy escapes the editor(s) who seem to forget that this activity takes places in the sea, the natural and most economical route for travelling to and from the mainland of St. Vincent. Third, swimming presupposes the ability to swim, in this case possessing the prerequisites for building an international airport — increased tourist demand; airline commitment; and expanded hotel capacity — none of which we now have or are likely to get with the completion of AIA.

This is the 29th in a series of essays on the folly of the proposed Argyle International Airport.