Why St. Vincent Island has so few tourists 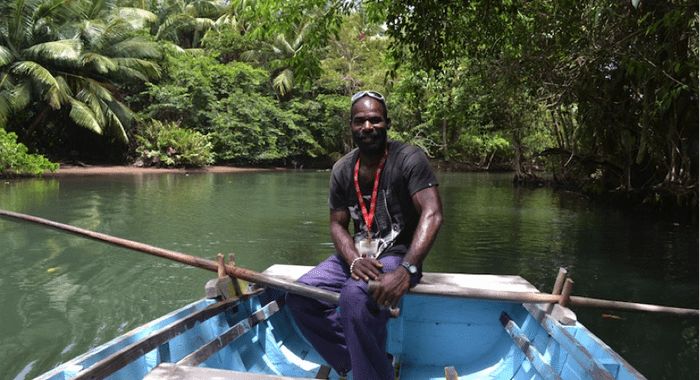 One of Dominicas many navigable rivers.

The 20,000 stayover tourists who visited St. Vincent Island (SVI) in 2015 (see essay number 33 below) accounted for 0.07 percent of the total of nearly 29 million foreign holidayers who visited the Caribbean last year. This works out to one Vincentian tourist for every 14,350 Caribbean tourist.

The prevailing wisdom in St. Vincent and the Grenadines (SVG) is that these rock bottom figures are because of the absence of an international airport on the mainland.

Not only does this opinion pervade the public consciousness, it is the view of the mainstream media as well:

“One obvious economic possibility emanating from having an international airport is tourism. Our country has many attractions but we have not been able to fully maximize the benefits which could be derived because of limitations in accessing this country by air” (“The Argyle International Airport editorial opinion, Searchlight newspaper, January 22, 2016).

It has been my contention in all of these essays that these popular axioms need to be justified by their ability to generate or substantiate factual evidence.

The most influential expression of the Searchlight position comes from no less a tourism guru than the Prime Minister himself, the Honourable Dr. Ralph E. Gonsalves, who in a “historic address” at the Methodist Church Hall on his August 8, 2005 birthday argued that:

“Does St. Vincent and the Grenadines really need an international airport?

As I have already argued, “Having studied this issue for many years” certainly did not involve carrying out a comprehensive economic feasibility study (see essay 21). Given three consecutive election wins since this famous speech which promised the completion and operation of an international airport during the following mandate, a pledge that has gone unmet the same three times in a row, one is left to wonder whether the issue the Prime Minister really “studied … for many years” was how the sheer act of building an airport would keep him in power from one election cycle to the next.

A careful feasibility study, had it been undertaken, would certainly have compared our local tourism situation, including the “many attractions” the Searchlight newspaper claims we have, with those of analogous or otherwise relevant regional locales, among the most informative of which would have been our Eastern Caribbean Currency Union partner, the Commonwealth of Dominica, a nation with which we share many topographical and natural features as well as the absence of an international airport, and our very own Grenadines islands, to assess whether our meagre mainland tourism numbers do in fact reflect the lack of non-stop flights from North America and Western Europe.

The aim of this essay is to do just that based on the figures in Table 1.

The data in Table 1 provide no evidence to support the Prime Minister’s position that building an international airport at Argyle would inevitably create a surge in mainland tourism demand.

Dominica has over four times more overall holiday visitors than St. Vincent Island (for tabular data on the difference in arrivals between 2001-15 (see Herbert “Haz” Samuel’s outstanding recent essay); cruise ship passengers arriving in Dominica are nearly three and a half times higher than those arriving in Kingstown; stopover air arrivals of tourists to Dominica are nearly four times higher than such arrivals to our mainland; such arrivals to the tiny string of Grenadines islands are only 30 percent below arrivals to the mainland; cruise ship passengers landing in The Grenadines are only one-third the level on the mainland despite the fact that neither Bequia, nor Canouan, nor Union Island have cruise ship piers, thereby forcing passengers to come ashore using small and cramped tenders, a practice that deters many people from landing, especially those with handicaps; the tiny Grenadines have over six times more yacht visitors than the mainland; and the much larger and more populous mainland of St. Vincent has only 24 percent more tourist visitors than the Grenadines, a figure that surely misrepresents the actual number of stopover visitors (see essay 36).

What accounts for these dramatic differences in tourist visits between these three places? Again, implicit in the Prime Minister’s statements is that the primary cause is the absence of an international airport on the mainland, an assumption with no supporting evidence.

First, all over the world, but especially in the tropics, tourism demand is what pushes the supply of holiday infrastructure such as airports, roads, hotels, and resorts, as the recent partial opening up of Cuba to American tourists has clearly shown, an issue I will detail in a subsequent essay.

Though we have “many attractions” on the mainland (especially beautiful scenery and good hiking possibilities), we still fall well short of what is available elsewhere.

In the Caribbean, as in much of the tropical world, the most important tourist attractions are endless strands of white sand beach, awe-inspiring seaside views, shallow inshore waters, and calm turquoise seas. This is why our Grenadines are such a renowned sailing area and receive so many visitors. It is also why most national expansion in hotel occupancy is occurring there rather than on the mainland to meet growing demand, as the recent ground-breaking of a new resort in Bequia proves. Conversely, this is why our ramshackle and rusting airport will always attract few visitors.

But even in the absence of ocean attractions, tourists can also be captured by the allure of an island like Dominica which features: glorious scenery; a small sparsely distributed population lending an aura of sojourning in a nearly uninhabited tropical paradise; a network of well-groomed hiking trails, including the new 84 km (115 miles) Waitukubuli National Trail, a first of its kind in the Caribbean; a boiling lake; a freshwater lake; hundreds of rivers, many of them navigable and featuring canoeing, river rafting, and tubing; seven large and small waterfalls and associated bathing pools easily accessible by car via a network of well-maintained roads crisscrossing the country; numerous sulphur springs, hot pools, and thermal spas; a myriad of eco, hiking, camping, and excursion tours; snorkeling and scuba diving; a Carib cultural village by the sea (Kalinago Barana Aute), in the heart of the aboriginal territory; lots of traditional native arts and crafts; a unique 300-year-old market square in the capital; deep sea fishing; and horseback riding.

TripAdvisor, the largest travel site in the world, lists 202 things to do and see in Dominica (hikes, tours, waterfalls, spas, boat trips, etc.). The corresponding number for SVI is three times lower at 68.

What TripAdvisor fails to mention is the impressive way Dominica, a country far poorer than us, advertises, protects, and enhances its tourist resources and support services, including the professional manner in which it documents its visitor statistics, with a much smaller government budget and workforce than ours.

Overall, then, our mainland is simply not ready in resources, maintenance, imagination, talent, motivation, and promotion to receive many more holiday visitors.

Stated more simply the old Chinese proverb that “a fish rots from the head down” — in this context meaning that if our tourism people are inept, it is because of the incompetence of those at the top — is actually only half true. In our case, the tourism fish has always rotted simultaneously from both head and tail.

The inescapable conclusion is that: (1) in the absence of actual or potential demand based on reliable and believable forecasts which are, in turn, (2) grounded in the sheer number and/or desirability of local attractions and activities, (3) together with the inept promotion, enhancement, and protection of these attractions and activities, the very construction of a new airport aimed at boosting passenger arrivals, has been an extraordinary fool’s errand.

Not only are our tourism numbers almost non-existent by Caribbean levels, they have actually declined in the past 16 years under Unity Labour Party rule (see essay 27 below), the number of advertised rooms on the mainland is a lowly 750 (see essay 36 below), our premier resort at Buccament Bay is teetering on the brink of closure, and many other small hotels, resorts, and guest houses are barely treading water or have closed in recent years.

Is there any doubt that the combination of all these factors are why international carriers — bottom-line obsessed corporations that conduct detailed cost-benefit studies before signing on to new routes — are reluctant to contract to fly to the unfinished airport at Argyle?

Except for the opening of Buccament Bay Hotel and Resort in 2011 (with less than a 100 of its promised 1,200 rooms built), our holiday room numbers have not changed much in the past 10-15 years, if not longer, even though, like many other Caribbean islands, we have had various kinds of visitor accommodation in the form of inns, boarding houses, and small hotels for 100 years or more. But while holiday visitor numbers kept going up elsewhere (e.g., Bermuda, the Bahamas, Cuba, Jamaica, St. Lucia, Barbados, and Grenada) long before any international air travel, we reached nearly our limit on new hotel demand long ago.

This assertion does not include the Grenadines, our captivating necklace of tiny islands, whose tourism numbers and revenue keep going up as new hotels, resorts, and villas have continued to be built year after year for the past six decades. Why has this Grenadines development occurred while comparable projects on the mainland have been far fewer in number and so inferior in quality?

A comparison of the photos of Palm Island and Young Island — a resort whose lease has been for sale for decades — answers this question.

So, why does St. Vincent Island have so few tourist visitors? Actually, this question is misleading because it implies that we could substantially increase these numbers by doing X, Y, or Z. My conclusion, explicitly detailed in 37 essays, is that notwithstanding our anaemic tourism efforts, the mainland has just about as many tourist visitors as its attractions deserve.

This is the 37th in a series of essays on the folly of the proposed Argyle International Airport.

4 replies on “Why St. Vincent Island has so few tourists”