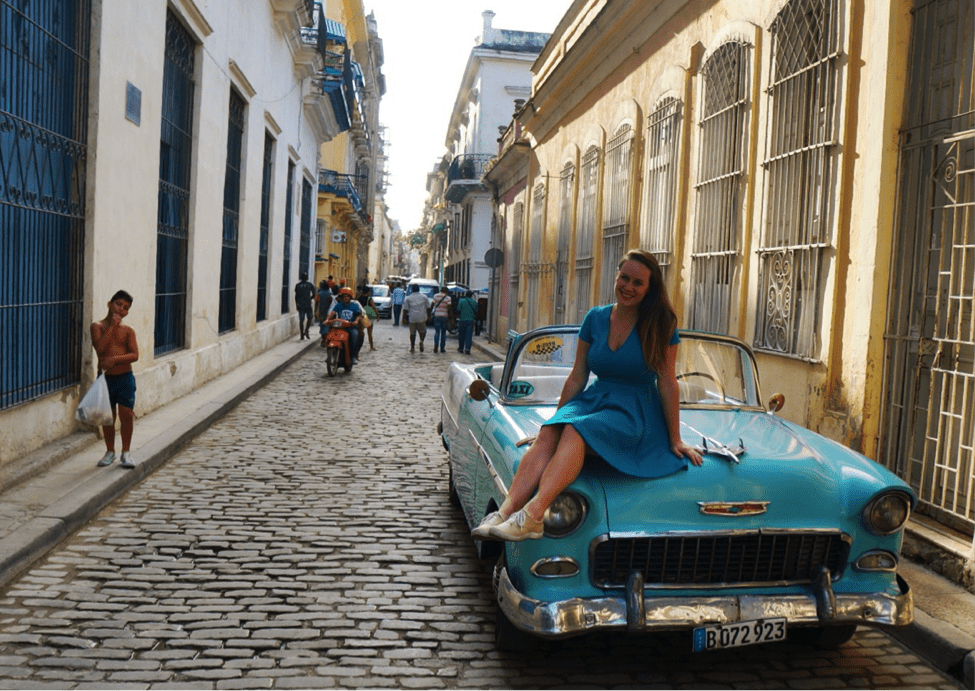 A charming Havana alleyway and vintage 1950s Chevrolet, a legacy of the embargo.

Cuba is the best Caribbean example why it was economically foolhardy to build an international airport at Argyle without either a surge or steady increase in tourists flying here, combined with firm guarantees from developers to build hotels, resorts, and other hospitality facilities in response to an upswing or continuous growth. This assertion flows from the observation that tourist activity in Cuba has been a rollercoaster of ups and downs based on fluctuating political and economic circumstances confronting inexorable external demand to visit a country with so many tourist attractions that it would take at three more essays to document even some of them. (Dozens of book-length travel guides are available on Amazon.com.)

The previous American surge in travel there ended in 1961. Cuba’s proximity to the United States (531 km, or 330 miles, from Miami) and its historically friendly ties to the richest country in the world proved worthless after the late Fidel Castro chose a dictatorial Marxist path, made the Soviet Union the country’s chief patron, and arbitrarily expropriated and nationalized local and American resources without compensation, resulting in a lawful trade and travel embargo imposed by the United States two years into the Cuban revolution. The immediate fallout was that the tourist industry, heavily dependent on American visitors, nosedived to record lows.

With the American re-establishment of diplomatic ties with Cuba in 2015, as detailed below, the tourism industry is already benefiting from better relations with its 54-year enemy.

But the rollercoaster has an even longer history than this. Prior to the embargo, Cuba had long been a popular holiday destination. Between 1915 and 1930, Havana hosted more tourists than any other location in the Caribbean, largely due its propinquity to the United States, where the Prohibition on alcohol (1920-1933) and other “sinful” pastimes (such as gambling and prostitution) was starkly different from the island’s “anything goes” policy.

A combination of the 1930s Great Depression, the end of Prohibition, and World War II basically sank the tourist industry, and it was not until the 1950s that visitors returned in numbers that grew at a rate of 8 per cent a year resulting in Havana becoming called “the Latin Las Vegas.”

As is well known, the 1959 Cuban Revolution changed all that. Many bars and gambling halls associated with prostitution and the drug trade were closed, U.S. banks and businesses were expropriated, nearly all private farmland was nationalized without compensation along with everything in the tourist sector, including the hotels and resorts, together with the personal, family, and business property of thousands of Cubans and foreigners. The U.S. responded with the already mentioned embargo on trade and American visitors, the latter by then constituting 80 per cent of the country’s holiday visitors.

For three decades between 1961 and 1991, tourism was sluggish as the Dominican Republic, Puerto Rico, the Bahamas, Jamaica, and other Caribbean countries took advantage of the American embargo and the mismanagement and inefficiencies state ownership of Cuba’s hotels had created. But the pent-up demand for visits by Americans never waned and thousands of U.S. citizens annually subverted the embargo, risking hefty fines or incarceration in the process, by travelling to Cuba via Canada and Mexico.

The implosion of the Soviet Union in 1991 was felt like an earthquake in Cuba. The USSR had been the country’s chief trading partner and had protected Cuba’s uneconomical sugar industry with large subsidies for 30 years (in the same way trade preferences sheltered our small-scale banana industry for decades). The lack of agricultural alternatives pushed the country into a deep economic depression known in Cuba as the “Special Period” which soon encouraged the enactment of policies to draw on the growing tourist markets of Canada and Europe.

Between 1990 and 2000, more than $3.5 billion was invested in the tourist industry in partnership with overseas developers. The number of hotel and resort rooms grew from 12,000 to 35,000 and the country received a total of 10 million visitors. By 1995 the tourist industry even bested sugar as Cuba’s major foreign exchange earner.

Before this and other tourist booms, Cuba had depended for its survival on the shipment by boat of sugar and tobacco (which is how these crops are still transported today). But as a response to growing tourism numbers and revenue, the country built most of its 10 international airports. It is uncertain how many Americans continued to travel to Cuba each year as tourists (although Americans could still visit for other reasons such as cultural exchanges) in violation of U.S. trade policy, but the number ranges from 20,000 to over 60,000.

As is now clear, the normalisation of relations between Cuba and America in 2015 has been nothing short of revolutionary, this time from a capitalistic perspective.

The American Embassy has been reopened; President Obama met with the Castro brothers on his March 21, 2016 visit and has since asked Congress to lift the embargo; the U.S. government has tentatively authorized 60 of what may eventually become 110 non-stop regularly scheduled round-trip flights by eight of the 12 American airlines that vigorously lobbied the administration to fly to Cuba; cruise ship visits have resumed for the first time in over 50 years; visits by Americans have gone through the roof, even with the restrictions that are still in place; the mega-hotel chain, Starwood Hotels and Resorts, has just announced the opening of the Four Points Havana, the first American hotel to welcome guests to the island nation since the revolution; Canadian developer, Montreal-based 360 VOX, is preparing to break ground on a $1.4 billion development with 27 holes of golf, four luxury hotels, and 2,700 high-end villas and apartments for sale to foreigners; and the first direct commercial flight from the United States in 55 years, an American Airlines aircraft, landed in Havana on November 28, 2016.

As one news story reported:

“The surge in visitors to Cuba, brought on by the December 2014 detente between the island and the U.S., caught the Caribbean nation unawares.

Hotels are overwhelmed and Cuba can’t build new hotels fast enough to cope with the boom in visitors from the US and around the world. Last year [2015] 3,524,779 people visited Cuba, a 17 per cent increase on the year before.”

If these onerous U.S. travel restrictions to Cuba are soon lifted, even under a Donald Trump administration, as many believe, this would lead to a tsunami in American visitors combined with a painful slump in tourists travelling to the rest of the Caribbean. This explains why nearby countries like Jamaica and the Dominican Republic are scrambling to forge multi-destination partnerships with their still communist neighbour to mitigate this potential catastrophe.

And where would this leave our mainland, St. Vincent Island, where not a single international airline has made public any interest in servicing our nearly completed and soon to be partially operating AIA? Even further behind the pack as an appealing holiday destination.

The Cuban example is one of many that makes crystal clear the fallacy – some would say lunacy – of having constructed AIA: when it comes to Caribbean tourism, indeed global tourism, visitor interest and demand are the overarching drivers of the supply of holiday resources and infrastructure, including the building of airports, not the other way around.

This is the 42nd in a series of essays on the folly of the proposed Argyle International Airport.