What the world teaches Black Sands Resort and Villas 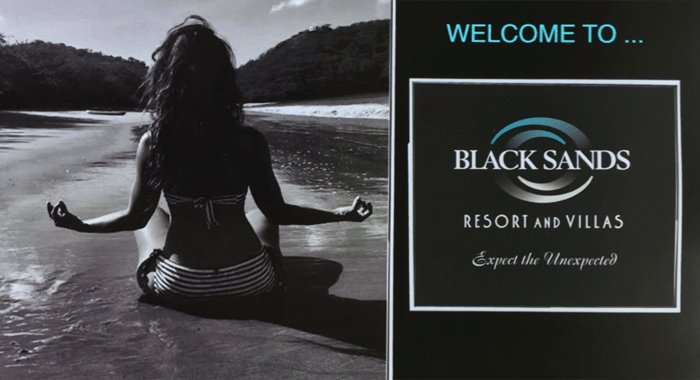 “The construction of the new Argyle International Airport [AIA] will be an instrumental contributing factor in attracting a multitude of flights from all over the world increasing tourism into our resort” (Black Sands promotional brochure).

The recent decision by PACE Developments Inc., a mid-sized Toronto-based house and condominium builder, to construct a 275-room US$60 million complex on 36 acres of land at Peter’s Hope Bay on St. Vincent Island (SVI) called Black Sands Resort and Villas is one the company may soon regret.

There are several signs pointing to the likely failure of the project:

(1) SVI has never been a popular tourist destination because of its relative lack of desirable attractions, especially the absence of powdery white sand beaches fronting shallow inshore waters, grave defects that PACE is valiantly trying to market as attractions;

(2) trying to dress up the course volcanic sand, deep and stony inshore area, and uninviting dark waters at Peter Hope with a few cosmetic features and some public relations hyperbole — “incredibly unique and magnificent Black Sands” — would be like putting lipstick on pig; (3) this is reflected in their unappealing promotional brochure, an amateurish effort perhaps hastily put together by the government agency Invest SVG;

(3) falsely claiming in the brochure that SVI currently has a zip lining facility does not speak well to the company’s knowledge of the island’s attractions; (4) PACE is the first developer bold (or foolhardy) enough to buy land in a larger seaside area of nearly 700 acres that has stood unwanted since acquired by the previous government for tourist development in 1998;

(4) the Prime Minister is already backtracking on long-standing promises that contracts would be signed within months with international airports to fly to Argyle on a regularly scheduled non-stop basis from overseas, and,

(5) PACE has the causal connection between international airports, international carriers, and tourist visits — as quoted above and presumably spoon fed to the company by all manner of government official — totally backwards and omits the most important tourism factor: the number, variety, and desirability of existing attractions.

My purpose here it to add two similar examples and two additional observations: (1) many international airports do not depend on huge tourist inflows and

(2) many popular tourist destinations are far from international airports.

The Bahamas. The Bahamas archipelago is located southeast of Florida. Its total land area is almost 14,000 sq. km. (5,400 sq. mi.), containing an estimated population of 330,000. Tourism not only accounts for over 60 per cent of the Bahamian Gross Domestic Product (GDP) but provides jobs for more than half the country’s workforce.

Though most visitors arrive by sea, The Bahamas is well served by flights from North America and Europe. Some airlines fly straight to airports on the larger Out Islands but most flights land in Nassau or Freeport where passengers conveniently re-connect on other regional airlines before flying to the Out Islands.

What this means is that of the 1.3 air arrivals, about 180,000, or 14 per cent have to take an additional flight on a regional airline from Freeport or Nassau to reach their final island destination.

Vieques (Isla de Vieques), Puerto Rico. Vieques is an island municipality of Puerto Rico in the northeastern Caribbean lying about 8 miles (13 km.) east of the Puerto Rican mainland. It measures about 21 miles (34 km.) long by 4 miles (6 km.) wide and has a population of around 9,300. Although tourism began only after 2003 (due to its previous use as a United States naval base), the absence of an international airport has not deterred the annual arrival of over 300,000 visitors, most of them attracted by its over 40 golden sand beaches.

Andorra. The only way to reach this land-locked principality in Eastern Europe bordered by Spain and France is by train, bus, or car. Andorra has a four-season tourism industry that annually attracts over 10 million people to a country with an area of 468 sq. km. (181 sq. mi.) and a population of approximately 85,000. Tourists from all over Europe come to ski and enjoy other outdoor activities. Because it is not a member of the European Union, Andorra can sell many duty-free products, including alcohol, perfume, and cigarettes, another feature that attracts visitors. Andorra also has a plethora of outstanding hiking trails catering to all levels of walkers, which can be explored during the summer months.

Monaco. Also a principality, this famous micro-state located on the French Riviera in Western Europe has an area of only 2.02 sq. km. (0.78 sq. mi.) and a population of about 37,800 making it the second smallest and most densely populated country in the world. This small size and population density could not possibly accommodate an international airport.

Monaco’s pleasant climate, attractive scenery, and gambling facilities have contributed to the principality’s status as a tourist destination and recreation centre for the super-rich and ultra-famous. In 2015, it received 561,184 stayover visitors for an annual room occupancy rate or 67 per cent, or double our mainland rate.

San Marino. This independent nation without an international airport is an enclaved micro-state inside the boundaries of Italy that has a size of just over 61 sq. km. (24 sq. mi.) and a population of about 32,000. In 2014, the country received over two million tourists most of whom drove there by car to visit the varied historic attractions of City of San Marino itself.

There are also dozens of international airports that serve as minor hubs or end points in countries where international tourism is relatively low by global levels: most of Africa; much of Eastern Europe; and central and northern Asia. Together these three regions encompass over one-third of the world’s landmass.

In the United States, the 409 parks, monuments, and other protected government sites totalling 84 million acres and administered by the National Park Service saw a record number of 305 million visitors from around the globe in 2015. Most of these reserves are in remote, sparsely populated areas far from even the closest commuter airport. There are a handful of lodges in some of the parks supplemented by surrounding motels and small hotels. Accessing the tourist sites means entering mainly by bus, motorhome, car, or truck, often pulling a camper or travel trailer. All these sites contain government-run in situ camping areas or off-site commercial campgrounds to accommodate visitors who sojourn mainly in tents, campers, or trailers. This means that visitors often spend several days on the road reaching their destination or driving from one park to another.

All this proves that international airports and large hotels or resorts are neither necessary nor sufficient to promote tourist demand wherever that demand exists.

The same holds true for wilderness and adventure tourism to public non-park areas in Alaska and Northern Canada as well as safari tours to low population density (except for the wildlife) areas all over sub-Saharan Africa that are hundreds of miles from the nearest international airport.

Then there are the famous Galapagos Islands, a protected nature preserve consisting of a Pacific archipelago of volcanic islands belonging to Ecuador and made famous by Charles Darwin, father of the theory of evolution. The local population of 25,000 (nearly all migrants from the mainland mainly employed in the tourism industry) is confined to specified locations while holiday visits are highly regulated to preserve the delicate and irreplaceable environment of flora and fauna.

There are only 116 visitor sites in the Galápagos: 54 land sites and 62 scuba-diving or snorkelling sites. Small groups only are permitted to visit in two- to four-hour shifts to limit impact on the area. All groups are accompanied by licensed guides.

Still, its remote location, high expense of getting and staying there, lack of even indirect air access, and strict conservation regulations have not prevented an annual global tourist visitor level of 200,000 people.

In sum, the statement in PACE’s Black Sands brochure is false: the construction of an international airport does not invariably or inevitably bring more airlines, more flights, or more passengers, as the failure of several international airports has clearly shown (see essays number 2 and 22 below). More particularly, there is little direct, necessary, sufficient or determinative relationship — in one direction or the other — between (1) airports, whether regional or international, (2) tourist accommodations (such as hotels, resorts, apartments, guest houses, inns, condominiums, private homes, tents, trailers, campers, etc.), and (3) holiday visitor locations, levels, features, or desirability.

Did PACE, a company with little international tourism experience or presence, do a proper feasibility study which determined that their resort and hotel would attract enough guests to ensure profitability at a seaside area with no white sand and deep inshore waters on an island with so few off-beach tourist attractions?

If not — if PACE decided to take on this project the way the Honourable Prime Minister decided to build AIA and Dave Ames decided to build Buccament Bay Resort and Hotel — the company may soon learn the hard way that it has the tourist development sequence ass-backwards: a mountain of evidence shows that highly desirable existing holiday attractions produce visitor interest which translates into increased tourist traffic (whether by plane, car, bus, train, ship, or foot); when the most convenient way to access a sought after destination is by flying there, then airline traffic inevitably increases to a point where new airports may be needed or old ones may need to be expanded, not the other way around, as PACE falsely claims.

To be sure, in many parts of the world, having an international airport certainly makes it simpler, cheaper, and quicker to reach the destination of one’s choice. But such an airport neither determines the choice of destination nor ensures that the destination is an appealing one. “If you build an airport, they — the big airlines, the foreign tourists, and the celebrated hospitality developers — will come” simply does not apply to the vacation industry which is based on interest and attractiveness, nothing more, nothing less, nothing else.

At the end of our long, costly, and twisted road to AIA, we are bound to also learn the hard way what most Vincentians will view as the astonishing revelation that international airlines and airports are simply means to an end — to speedily and handily get people from one place to another — not ends in themselves or sufficient means to other ends, unless those other ends are to win two-in-a-row, three-in-row, four-in-a-row, and, soon after AIA is totally operational (but not fully operating), five-in-a-row.

This is the 43rd in a series of essays on the folly of the proposed Argyle International Airport.