From ‘poppy show’ to campaign rally: The Argyle Airport opening 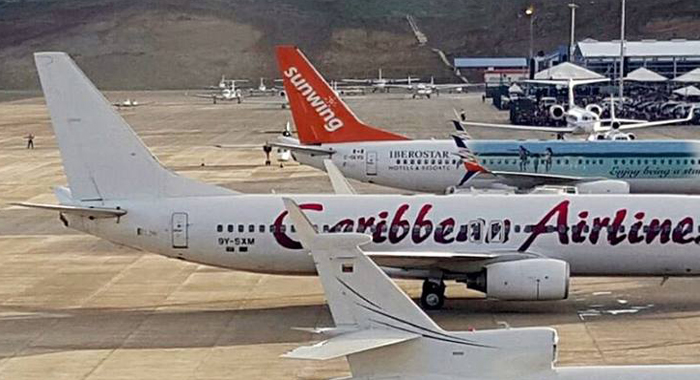 To term the opening of AIA on Feb. 14, 2017, as being premature, even immature, would be an understatement: much of the landscaping and other work was still not completed; huge gaps remained in the fowl-coop fencing surrounding the facility; contracts for regularly scheduled non-stop international flights were on the distant horizon; and the four chartered flights saw few passengers disembark and even fewer go onboard.

Indeed, a far more apt term would be to call a “poppy show” the painfully slow-motion 2001-2017 exercise from immaculate conception in the mind of the Comrade to quasi-operation on Feb. 14 of an airport for which there was neither a compelling need nor a rational purpose. This is not because many of the invited outside dignitaries failed to appear, sometimes sending lower-level surrogates instead, or because far fewer than the tens of thousands of expected patriotic celebrants showed up, despite the declaration of a national holiday, or because the business sector, including our hoteliers, have always given a big yawn to the airport’s construction, or even because the airport’s financing was spurned from the beginning by our traditional donors (the World Bank, the Caribbean Development Bank, the European Union, Great Britain, the United States, and Canada).

Instead, the “poppy show” designation refers to the clear lack of active interest in AIA’s completion by the hundreds of thousands of diasporic Vincentians, their children, and grandchildren, an assertion confirmed by the figures in the two tables below (compiled from an iWitness News story.)

To be sure, although the Prime Minister announced that the airport would open on Valentine’s Day in a Dec. 29, 2016 media comment six weeks earlier, actual bookings were accepted only three weeks prior to the opening, thereby making it difficult for most working people and others to make the necessary travel arrangements to come to SVG on that date. Still, this needs to be contextualised by two other traveling cohorts: (1) many ticket-paying flyers chose one of these flights not because they were planning to travel to SVG on or about this particular date but because of the historical nature of the Feb. 14 airport opening and (2) many of the passengers who deplaned were government officials, hangers-on, and media personnel whose passage was sponsored from the treasury of SVG or by other parties because of the ceremonial and newsworthy nature of the flights. (Every large commercial flight carries people whose passage was supported by other parties and who would not otherwise have travelled, but I contend that the Feb. 14 fights contained a disproportionate number of such persons partly to fill empty seats that had already been paid for by the state).

My assumption is that these two categories compensated for the passengers who would have flown down from Toronto and New York, save for work and other constraints, an assertion supported by the pitiful departure numbers on Feb. 14 and the equally wretched arrival levels on Feb. 21.

I suspect that at least half of the 217 passengers who deplaned on Feb. 14 from New York and Toronto fell into one of these categories. In other words, I hypothesise that no more than 100 or so passengers chose these flights because they were already planning to come to SVG on or about Valentine’s Day. For them, flying non-stop from Toronto or New York was more convenient (but not necessarily cheaper) than flying through Barbados, St. Lucia, Grenada, or Trinidad, among other options. This leaves well under 100 persons who paid out of pocket for the privilege of flying home on one of three historic flights non-stop from mainland North America.

Explaining the higher number of non-stop departures on Feb. 21 is more difficult. Certainly, an additional week of booking time might have made some difference but this leaves unanswered why 15 times fewer passengers arrived on the Sunwing and Caribbean Airlines flights than departed the same day.

But even at a 15-fold level, the 55-per cent capacity of the Sunwing Airlines departure flight to Toronto on Feb. 21 was far below the 95-100 per cent aircraft load to popular Caribbean destinations during this peak winter visitor period. The same holds true for the Feb. 14 Sunwing arrival flight.

This high demand also means that thousands of last minute flyers are annually disappointed to find that they cannot book a flight to their preferred destination during peak periods. Why at least a minuscule portion of the 30 million tourists who visit the Caribbean every year — plus a few more diasporic Vincentians not constrained by other commitments — could not have been lured to St. Vincent Island on Feb. 14 or 21 to fill the 726 empty seats on Dynamic Airways, Caribbean Airlines, or Sunwing is something our hardworking Tourism Authority and its CEO, Glen Beache, need to explain to us.

All these empty seats do not speak well for the attractiveness of our destination or the chance of success of our new airport.

This is why our laughable Valentine’s Day and post-Valentine’s Day passenger figures are the furthest thing from “a metaphor, a symbol, an alive testament to what a determined people … can achieve” that one could possibly imagine unless, of course, the aim was to achieve the poppy show of poppy shows.

Surely there must have been another goal here from our Smart-Man Leader.

As for the cost of the charter flights that Glen Beache promised would be sold out within an hour of their offering, my figures (which may or may not include taxes) are as follows:

This deficit, equivalent to EC$ 1.23 million, does not include the dozens of “free” seats occupied by various dignitaries, public servants and allied timeservers whose numbers would raise this sum to at least EC$ 1.5 million.

That the Tourism Authority couldn’t even fill the empty pre-paid seats with freeloading passengers speaks volumes to both its competence and our ability to develop our holiday sector.

Looking behind the façade of the facile explanation that “love is in the air,” the most burning question is why AIA was opened on this particular date? Why didn’t the Comrade simply tell us to wait until the first regularly scheduled non-stop international flights take off between Carnival and Christmas, as promised — after all, we have already waited patiently for nearly 12 years since the decision to build AIA was announced — even if this turns out to be a single weekly return trip by a heavily subsidised international airline? He could easily satisfy most of his critics and all his supporters by repeating that we need to start somewhere, this is as good a start as any, and in the long-term AIA will make us all far better off.

The farcical show on Feb.14 and its sillier sequel on Feb. 21 suggest that the Comrade received another “divine inspiration” which told him his government would likely lose the election petitions case, the next stage of which he immediately claimed would lead to a snap national election if the results again favoured the opposition, presumably even if only one of the two contested seats were lost. Without the hasty opening of the airport, a possible loss of power over the next year or so would give the New Democratic Party credit for getting AIA up and running, an intolerable outcome for a man who has nursed this invalid of an airport for so many years.

This fear plus hunger for a five-in-a-row “Labour love is in the air” victory is the only explanation that makes sense to me.

If I am correct, the poppy show at Argyle was staged as the first campaign rally in our next season of electoral politics.

This is the 48th in a series of essays on the Argyle International Airport folly.My other AIA essays are listed below:

7 replies on “From ‘poppy show’ to campaign rally: The Argyle Airport opening”