More questions and answers about the Argyle airport puzzle 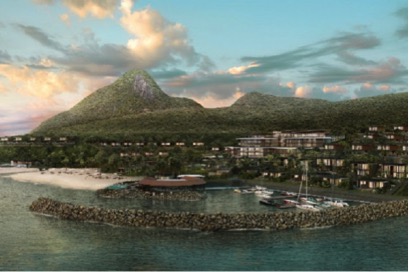 A rendering of Fairmont Saint Lucia, a 120-room luxury hotel with 40 private residential villas on 25 acres of beachfront expected to open in 2019.

This is the second last of five essays where I negotiate the cleverly conceived and executed Argyle International Airport (AIA) maze on St. Vincent Island (SVI) to determine its true purpose.

As I concluded in my last essay (see number 61 below), in mathematics, the sciences, and logic, the simpler the explanation that accounts for all the facts, the better. That’s why my axiom that, “St. Vincent Island has little developmental potential” and its corollary that, “The construction of an international airport would not boast our mainland tourism potential (because we have so few tourist attractions there)” better account for the following otherwise inexplicable facts and issues than does the prevailing free-market assumption that “St. Vincent has lots of potential” and its ipse dixit corollary proclaimed by the Honourable Prime Minister Dr. Ralph E. Gonsalves that, “Our country’s [mainland] tourism potential would not be fully realised unless we build an international airport”:

Question: Why have we been able to secure only one, limited-period, weekly Air Canada regularly scheduled nonstop international flight from Toronto to AIA, plus a handful of other short-term Sunwing charter flights from the same city, together totaling an insignificant 24 seasonal return flights between October 22, 2017 and April 12, 2018, after endless negotiations since 2007 with such carriers as Caribbean Airlines, WestJet, American Airlines, British Airways, JetBlue, Delta, Spirit, Virgin Atlantic, Air Berlin, and Copa using the prodigious talents of the highly-paid, university-trained employees at three government agencies: the Tourism Authority, the International Airport Development Company, and Invest SVG?

Answer: International airlines are cutthroat business ventures, as proven by the hundreds of bankruptcies, restructurings, mergers, acquisitions, and birth of new carriers over the past 40 years. No global carrier would service a new and unknown destination without assured profitability. Given our Caribbean rock-bottom Arnos Vale stopover passenger numbers (see essay numbers 33 and 39), the government would have been forced to guarantee upfront payment for a high proportion of unsold seats whose huge potential liabilities would have overshadowed any spin-off tourist sector benefits.

Q: Why all eight of the just announced SVG nominees for the prestigious 2017 World Travel Awards for the best country boutique hotel (Palm Island Resort) and the finest resort (Petit St. Vincent Resort) are located in the Grenadines.

A: Despite their relative inaccessibility compared to the mainland, The Grenadines have always been and will always be our premier holiday destination.

Q: Why, after 27 years of constant solicitation for the sale or lease of 680 acres of Crown land at Peter’s Hope/Mt. Wynne for tourist development, has only one unknown Toronto residential construction company with no Caribbean experience – Pace Developments Inc. — committed to spending a mere $US 60 million to build a 275-room hotel/resort project (see essay 43) while our Caribbean neighbours in St. Lucia, Barbados, and Jamaica have just attracted large new projects by such renowned hoteliers as Fairmont Hotels & Resorts, Sandals Resorts International, and Karisma Hotels and Resorts, respectively.

A: The mass tourism potential of our mainland is extremely limited compared to hundreds of other regional and global destinations, including our own alluring Grenadines islands, for all the reasons I have offered in previous essays.

Q: Why has elite Sandals Resorts International, which owns and operates 23 all-inclusive resorts on seven Caribbean islands, decided to construct up to 12 new Caribbean luxury hotels in the region over the next few years (including a $US 375 million 580-room complex in Barbados and a $US 500 million upscale facility in Tobago) but shunned development on SVI despite repeat visits here?

A: We lack the natural requirements on the mainland, especially huge swathes of white sand beaches, to be a luxury, mass tourism destination.

Q: Why can’t we capitalize on the unprecedented current Caribbean tourism boom: a record 29.3 million tourists visited the islands in 2016; 41,000 new rooms are under construction or being planned, up more than 40 percent from the previous year, an increase led by several major projects such as a 2,000-room casino hotel in Montego Bay, Jamaica, a 180-acre Marriot/Ritz-Carton hotel and villa project in St. Lucia, and a 934-room beach resort in Varadero, Cuba?

A: Again, we lack the natural features for mass tourism development.

Q: Why was Buccament Bay Hotel and Resort shuttered, perhaps for good, on Dec. 14, 2016, less than six years after its opening?

A: There was an apparent rejection of an alleged informal due diligence study by SVG’s National Investment Promotions Inc. — now called Invest SVG – prior to its construction which found that foreign developer Dave Ames had neither the knowhow, experience, nor finances to build and operate what was supposed to be a 1,200-room hotel and resort, of which only 108 rooms were ever available for rental. Presumably, Ames was allowed to proceed because we beggars can’t be choosers when it comes to foreign investors and because the Prime Minister’s primary goal was to convince a gullible and unlettered electorate that the resort’s existence was joined at the hip to the construction of AIA: no airport, no resort — no resort, no airport. Doubtless, this was also the reason why the resort’s business license was not suspended for failing to file annual financial statements and tax returns for most of the 2006-2015 period.

Ironically, but not unexpectedly, in his judgment in the case that the parent Ames conglomerate, Harlequin Hotels and Resorts, lodged against its former accountants, Wilkins Kennedy, the British High Court judge, Sir Peter Coulson, concluded that Harlequin paid its chief contractor tens of millions with no written contract, no detailed agreement about the scope of the works to be done, no monitoring of those works, and no knowledge of their valuation. The result, he argued, was that, “for a project of this size, the fact that there were no financial controls whatsoever beggars all belief.” Small wonder, then, that Ames is currently facing three counts of fraud in Great Britain totaling $EC 1.37 billion.

Parallel charges have also been laid against AIA by local engineering critics using the terms “fiasco,” “absence of even a halfway-competent management,” “a massive, costly project-management bungle,” “a slow-motion economic disaster in progress,” “a disastrous shambles,” “gross mismanagement and incompetence,” “bogus economic premises,” “reckless incompetence,” and “a net drag on the economy of this country” to describe the airport’s helter-skelter conception, planning, implementation, and construction. Justice Coulson concluded that Harlequin’s business model might be said to bear “the hallmarks of a serious and significant scam,” a charge also leveled against the AIA project by various critics.

More ironic still is the likely fulfillment of the country’s Minister of Public Works, Julian Francis’ statement, as far back as 2012, that AIA and Buccament Bay Resort, “… go hand in hand … They are twins. One can’t survive without the other.” An identical argument was offered by the Prime Minister for the Pace Developments Inc. agreement. If true, both Pace and AIA will suffer the same fate as Buccament Bay Resort — a slow and painful death followed by a quick burial in the cemetery of foolish development ideas and with the same negative consequences for the Vincentian economy.

But there is much more to this unhappy but predictable parallel development of AIA and the Buccament Bay Resort, an assertion I address in my next essay.

This is the 62nd in a series of essays on the AIA folly. My other AIA essays are listed below: